No real purpose to the list this month. Largely just random grabs from a stack of stuff I’ve thrown into the Amazon basket over the last few weeks based on various lists of things to read / prize shortlists etc… in an attempt to broaden out the kind of thing I’m reading. 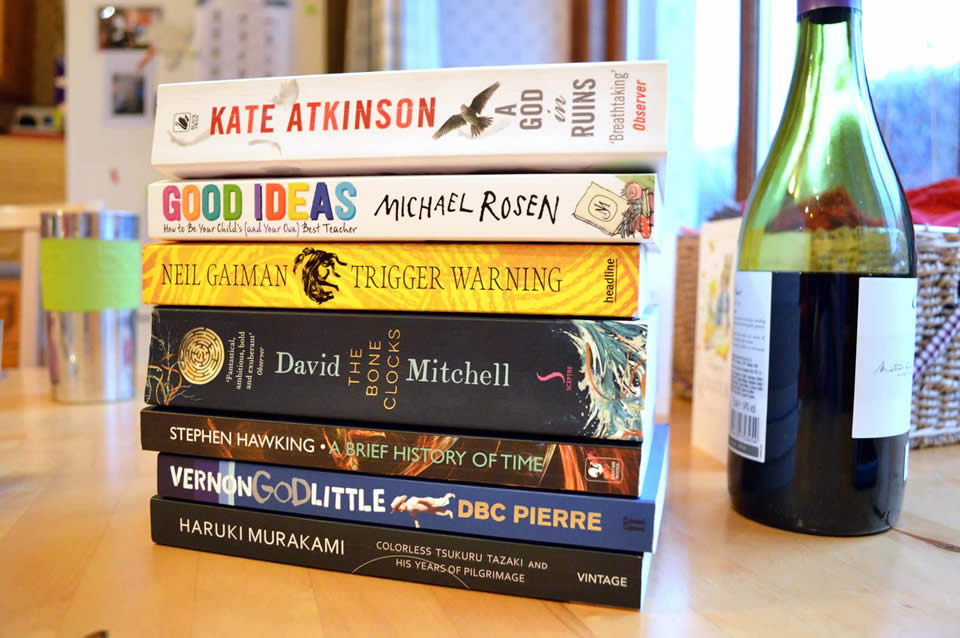 13 Colorless Tsukuru Tazaki and His Years of Pilgrimage (304 pages) Didn’t enjoy this as much as Dance Dance Dance, but still a delightful way to spend some train journeys. I love the way Murakami describes boring everyday stuff.

14 Vernon God Little (288 pages) Excellent wee book largely constructed of delightful sentences. Read over three days following Super Tuesday where Hillary and Trump look to be stealing a march, and a week after watching Making a Murderer. ‘Murica. Sigh. Another mention of six fingered people. Probably my favourite so far. Second Booker winner on the list. Need to order a few more.

15 A Brief History of Time (256 pages) I’ve never read this before. Oddly. I can argue about emissions from Black Holes, visualisations of four dimensional space, and your general General Relativity with the best of the armchair physicists – but avoided this previously for some reason. Probably a snobbish rejection of overly popular pop-sci. I’m an idiot. The transition at page 23 from Newtonian to Relativistic is brutal. I can see why people stopped at that end of the book. I wish I’d done more maths. I can’t help wondering what shape physics would be in today if it wasn’t for the Pope and his ilk.

16 The Bone Clocks (640 pages) I think this is the first spooky nonsense book so far. Unless you count Murakami dream stuff as spooky. Which I don’t think I do (thereby no doubt demonstrating that I missed the point of the book entirely). I’d have preferred this without the Dungeons and Dragons nonsense. Felt a little bit like an episode of Yu Gi Oh in the third quarter – a bit of a slog. Ended well though, with some This Changes Everything scenario stuff. I preferred the resurrections of Harry August.

17 Trigger Warning (352 pages) Talking of spooky nonsense! Short story books can be incredibly frustrating to read on the train. Getting half way through a chapter is one thing – being three pages from the end of a story is quite another. Some utter nonsense in here. I don’t understand the dr who stuff. Fun though.

18 Good Ideas (368 pages) I’m always being asked how things are made, how they work, why something is, etc… by the wee lads . This is still a good reminder that even boring stuff is endlessly fascinating if you just dig in a bit deeper. Also some nice ideas outside of my usual science / maths / logic zone. Well worth a read if you have little people. While reading this the wee lad asked “Dad. What’s the opposite of medium?”, Discussion ended at head scratching about wether infinity was actually on the number line or not. I resisted showing him this.

19 A God in Ruins (542 pages) This was the only book I already had in the stack that featured in the Baileys long list announced this month. Deliberately bought this because it’s not the kind of thing I’d usually read. A lot of the books so far have done the time jumpy thing to some extent – with things happening out of sequence. You read about the death and then the life – that kind of thing. It feels like this jumps around mid sentence sometimes as recollection and reality get mashed up. My simple brain had to skip back and fore a few times to make sure I wasn’t slipping into that auto pilot where your eyes are reading but your brain is running through a todo list. I’m cheating slightly including this one – I finished it on April 1st.